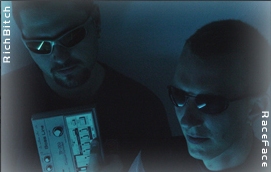 RichBitch has been a swiss Dance- and Techno-music producer
and live performer for over 2 decades now.
He is the founder and the driving force behind
RichBitch Productions, est. 1992 in Basel, Switzerland.

Joined together as SEELENSEE with

Allways planned to "move" something together,
they finally made it and the result was a Live-Performance
that looks for something similar on this planet...

Everything started on the PSYCHEDELIC OPEN-AIR at the
Langenerlen park in Basel 31.7.1999.
First time together on the stage, the success was so big,
that they decided to perform together also in the future.

Both artist's have their very own personal styles:

Where RaceFace is more melodic and straight,
with his musical roots in Hard-Trance and Acid,

RichBitch is the rhythmic goa groove-maker,
and monotonic Acid brainfucker, allways keeping the beat up,
leaving the public no chance for a rest.

Were as most of the worlds celebrated Techno Live-Performances
as Juno Reactor, Der Dritte Raum a.o. use a huge equipment
with tons of synthesizers, samplers, computers and mixers,
Seelensee decided to show the rest of the world that one really
can do miracles with much smaller and cheaper equipment!

When you hear it, you won't belive that all of their tracks
are live performed on only two Roland MC-505 and one TB-303!!

Because you don't need more to move the masses!

Check-it out and decide yourself!